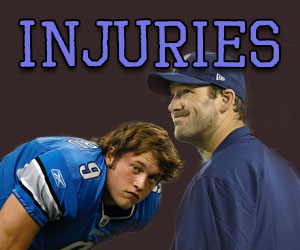 NFL injuries are so very important and are a major factor in understating what is sports handicapping. This past week in the NFL another long list of star players went down. We breakdown the biggest betting impact when it comes to these injuries – all four suffered by star quarterbacks – and what football bettors should watch out for when handicapping the Week 3 odds:

Tony Romo, QB Dallas Cowboys
Romo went down with a broken clavicle versus the Eagles in Week 2, leaving the Cowboys offense, which was already absent WR Dez Bryant, with backup Brandon Weeden under center. If Dallas wants to prove it has the best offensive line in the league, now is the time. The Cowboys will depend heavily on the run and short passes underneath to keep this team afloat, so the value could be there for the Under in Cowboys games going forward.

Matthew Stafford, QB Detroit Lions
The Lions could be the most disappointing team in the league right now – save for the Seahawks – and Stafford’s rib injury adds to that sorrow. His status for Week 3’s tilt against the Broncos on Sunday Night Football is up in the air, and without him Detroit leans on backup QB Dan Orlovsky against a Denver defense that leads the NFL in takeaways with seven (4 INT, 3 fumbles), converting those turnovers in 17 points.

Jay Cutler, QB Chicago Bears
Cutler is out for at least two weeks with a hamstring pull suffered in Sunday’s loss to the Cardinals. The Bears were stumbling offensively with him under center so it may not be that much of an impact when second-string passer Jimmy Clausen takes the snaps in Sunday’s showdown in Seattle. The Seahawks defense has been exposed and is out for a strong showing in front of the 12th Man in Week 3. It might not matter who’s under center for Chicago.

Drew Brees, QB New Orleans Saints
Brees hasn’t been up to his lofty standards in the first two weeks and now the team may be without their stud QB, as Brees is expected to miss at least this Sunday’s game against the Panthers with a rotator cuff injury. New Orleans may turn to Luke McCown to hold things together until Brees returns, so bettor should look for a heavy dose of RBs Mark Ingram and C.J. Spiller in Week 3 – keeping the clock running and scores low. 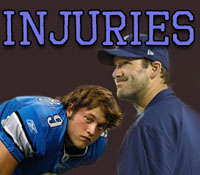 NFL injuries are so very important and are a major factor in understating what is sports handicapping. This past week in the NFL another long list […]
Do you like it?0
0 Read more 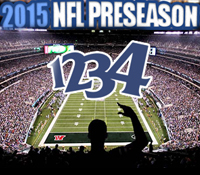 The NFL preseason is simply exhibition, and football bettors should treat it that way. Don’t get sucked into the preseason results or which players made a […]
Do you like it?0
0 Read more 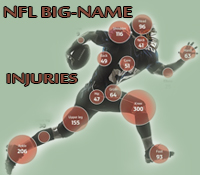 Players going down with season-ending injuries before the NFL season even starts is nothing new to football bettors. But the 2015 offseason seems especially bad when […]
Do you like it?0
1 Read more 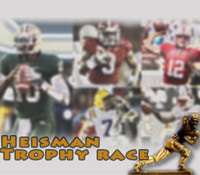